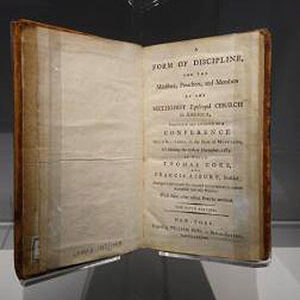 The full title of the book is a lengthy one: "A form of discipline, for the ministers, preachers, and members of the Methodist Episcopal Church in America, considered and approved at a conference held at Baltimore, in the state of Maryland, on Monday the 27th of December, 1784: in which Thomas Coke, and Francis Asbury, presided. : Arranged under proper heads, and methodised in a more acceptable and easy manner. With some other useful pieces annexed."