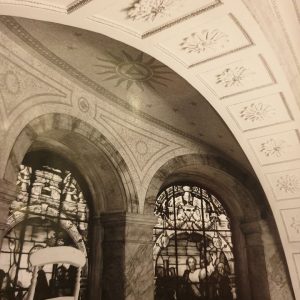 Two of the three stained glass apse windows in a close-up photograph during restoration works in 1978. The windows were installed in the 1890s, and this was the first time they were cleaned and conserved. The image also shows the architectural mosaic and plaster detail in the apse.

In Christian churches, the apse is often a semi-circular recess, usually where the altar is placed. Normally, it faces east.
View all services & events
We use cookies. By closing this banner, scrolling the page, or clicking a link, you agree to their use. Info.