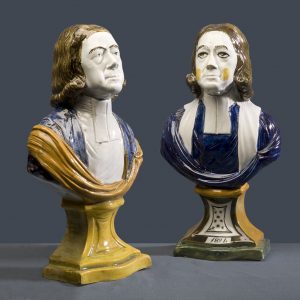 Two busts of John Wesley loosely based on the bust modelled by Enoch Wood in 1784 but produced by other artists and manufacturers. One bust is dated '1824', the other is undated. Both busts are crudely modelled and fancifully decorated. They are also smaller than Wood's model. As the years passed, Wesley busts became cruder and less realistic.

Compare also to the Wood-modelled busts of John Wesley in the Collection.
View all services & events
We use cookies. By closing this banner, scrolling the page, or clicking a link, you agree to their use. Info.