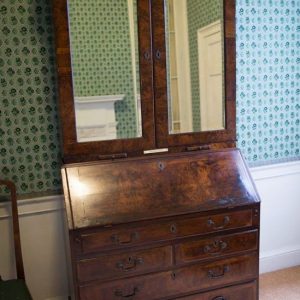 This bureau bookcase belonged to Charles Wesley and dates to the middle of the 18th century. Although first resident in Bristol, Charles and his family moved to Marylebone in London in the early 1770s. It is likely, therefore, that the bureau was made or acquired for the Bristol house and was later moved to London. This might also explain why the bureau, which is of good quality, is still veneered in walnut, rather than the expensive mahogany imported from the West Indies and then newly-fashionable in London.

The bureau was one of the early exhibits at John Wesley's House and its original label is still attached.
View all services & events
We use cookies. By closing this banner, scrolling the page, or clicking a link, you agree to their use. Info.