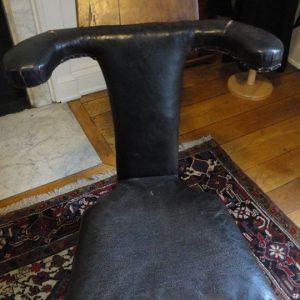 This chair, with broad armrests that form a yoke with the back rail and to which a collapsible reading desk is attached, was a library or reading chair. It became known later as a 'cockfighting' chair, because this type of chair was often illustrated in paintings and engravings of cockfights. Cockfights were a very popular - if cruel and bloody - pastime in the 18th century and often took place in the backyards of inns and pubs.

The seat of the chair is shaped so that the sitter can either sit normally or astride, facing the collapsible desk at the back of the chair. The large armrests made the latter position comfortable. Beneath one armrest is a hidden pen tray; underneath the other there would have been a fold-out brass candlestick, now missing. The desk flap has a compartment for storing paper, and beneath the seat is a drawer for storing documents.

The chair is an early example of this type. By tradition, it was given to John Wesley by a penitent, former cock-fight-loving man Wesley converted to Methodism. More likely, perhaps, it was a gift from a well-to-do patron.
View all services & events
We use cookies. By closing this banner, scrolling the page, or clicking a link, you agree to their use. Info.