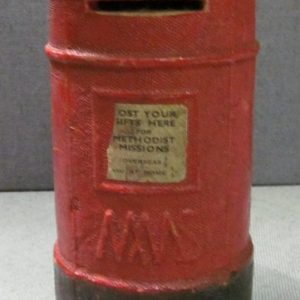 'Mission', in particular the conversion to Christianity of indigenous people, became an important aspect of Methodist work as the 19th century progressed. There were many small Methodist missionary societies which eventually, in 1932, merged to become the Methodist Missionary Society. This operated in Africa, the Caribbean, the Indian sub-continent, Europe, the Americas and Australasia.

This novelty collection box in the shape of a post box was used to collect money in Churches and further afield for the work of the Society.
View all services & events
We use cookies. By closing this banner, scrolling the page, or clicking a link, you agree to their use. Info.