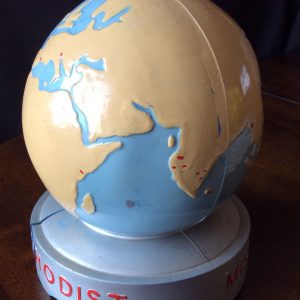 This novelty Missionary Society collecting box in the form of a globe dates to around 1950. It was used in churches but also in a non-church context to collect money for mission projects.

The Methodist Missionary Society was formed in 1932 out of many smaller missionary societies. The globe shape of the box illustrated that the Society operated world-wide - in Africa, the Caribbean, the Indian sub-continent, Europe, the Americas and Australasia.
View all services & events
We use cookies. By closing this banner, scrolling the page, or clicking a link, you agree to their use. Info.