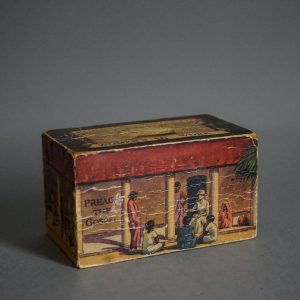 This early wooden collecting box was used in the work of the Wesleyan Missionary Society Department Women's Work.

The organised work of women in the Wesleyan Methodist Missionary Society (WMMS) began in 1858, as an auxiliary to the main Society. The Ladies' Committee aimed at promoting systematically women's work. Women were selected and prepared for employment, for instance as teachers, in the missionary field abroad and overseas. The Committee provided its own funds and worked independently from - if alongside - the WMMS.

Both WMMS and WMMS Women's Work became part of the Methodist Missionary Society in 1932, although Women's Work continued to operate separately until the 1970s.

For further information about the Methodist Missionary Society, see also the other collection boxes in the Online Collection.
View all services & events
We use cookies. By closing this banner, scrolling the page, or clicking a link, you agree to their use. Info.