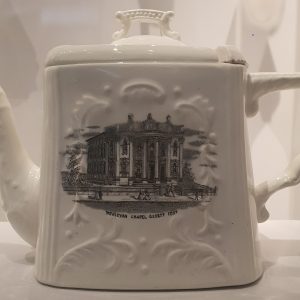 A 19th century Wesleyan Methodist commemorative teapot celebrating the opening of Ossett Wesleyan Chapel. The teapot is typical of the kind of commemorative ware produced at the time.

The Wesleyan Chapel on Wesley Street in Ossett was built between 1866-68. It was unusually elaborate for a local chapel and said to be the third largest Methodist chapel in England. It was demolished in 1961.
View all services & events
We use cookies. By closing this banner, scrolling the page, or clicking a link, you agree to their use. Info.