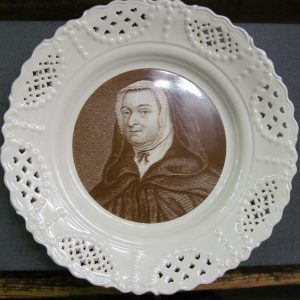 This commemorative Wedgwood plate features an image of Mary Bosanquet Fletcher (1739-1815). Mary was one of the first female Methodist preachers, and it was she who persuaded John Wesley to allow women to preach in public. Mary Bosanquet became one of the most popular female preachers of her day and was greatly revered by Methodists for her work. She was married to John Fletcher (1729-1785), the potential one-time Wesley successor who died six years before John Wesley.

'Creamware' is a cream-coloured, fine earthenware with a lead glaze over a pale body. It was invented about 1750 by Staffordshire potters and was very fashionable c.1760-1790.
View all services & events
We use cookies. By closing this banner, scrolling the page, or clicking a link, you agree to their use. Info.