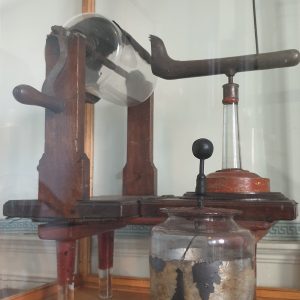 Like many educated men and women of the 18th century Enlightenment, John Wesley was an enthusiastic believer in the healing properties of electricity. Portable machines such as this one were invented to harness and channel electricity in the treatment of ailments.

In 1747 Wesley wrote a tract, the 'Primitive Physic', a compendium of treatments for many common problems and diseases. In this, he mentions use of 'electrifying' as treatment for a wide range of conditions. Unusually for 18th century London, Wesley offered free electrification for his followers, and it is known that Wesley had four electricity machines in different locations in London available for treatment. This is believed to be one of of them.

See also the black and white photograph of the electricity machine, 2012/13627, in the Online Collection.
View all services & events
We use cookies. By closing this banner, scrolling the page, or clicking a link, you agree to their use. Info.