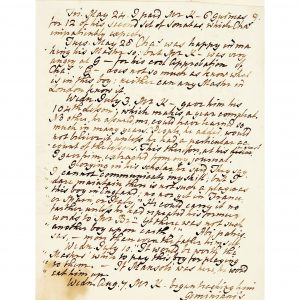 On Wed, July 3rd, he writes: 'Mr K... gave him his 104th Lesson (sic); which makes a year compleat (sic). No other, he assured me, could have learned so much in many years.' Charles Wesley jun. was noted as a child prodigy and became a composer and organist.

Like his brother John, Charles Wesley sen. wrote his diary in code. The entries here are written out in plain English and relate to his son and music. They are extracts from his coded dairy, written in his hand.
View all services & events
We use cookies. By closing this banner, scrolling the page, or clicking a link, you agree to their use. Info.