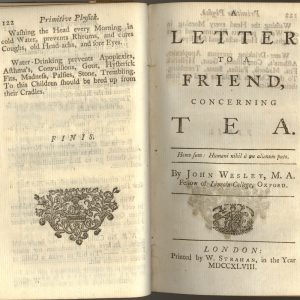 John Wesley's 'Letter to a Friend, Concerning Tea' is an attack on fashionable and expensive 18th century tea drinking. It illustrates Wesley's interest in health and personal economy.

In the pamphlet, Wesley recounts how, nearly three decades earlier, he found himself suffering “Symptoms of a Paralytick Disorder.” Wesley decided it might be his tea intake that was the cause; only cutting out tea altogether provided relief. It also helped save money.

Wesley had a lifelong interest in health. The year before, in 1747, he had published the “Primitive Physick,” an overall preventive approach to health which included a long list of remedies for specific ailments.
View all services & events
We use cookies. By closing this banner, scrolling the page, or clicking a link, you agree to their use. Info.