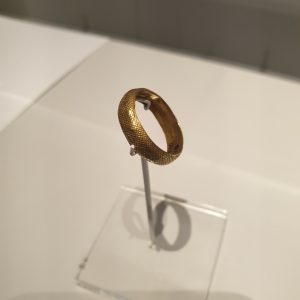 This ring was made from gold dust given by the king of the Ashanti to the missionary Rev. Thomas Birch Freeman during an exchange of gifts in 1841. The king permitted the establishment of the first mission post in the Ashanti capital, Kumasi, and later granted land for a second mission.

Thomas Birch Freeman (1809-1890) set up schools and agricultural projects in Africa and promoted the anti-slavery cause. Birch Freeman was the son of an African father and an English mother.

1992/20
View all services & events
We use cookies. By closing this banner, scrolling the page, or clicking a link, you agree to their use. Info.