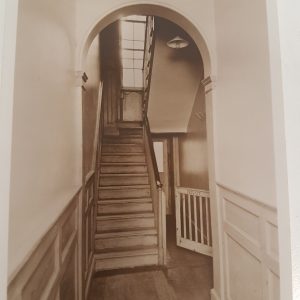 After the first floor rooms of John Wesley's House were opened as a museum in 1898, the house was refurbished a number of times with the aim to re-create faithfully the surroundings in which Wesley lived.

This mid 20th century photograph of the hallway in Wesley's House shows the half height pine panelling and stairs stripped bare. The walls were painted a shade of white or light cream. This decorative arrangement was in keeping with then prevalent ideas of Georgian design and decoration. Later research showed that pine was always painted and never left bare in Georgian times.
View all services & events
We use cookies. By closing this banner, scrolling the page, or clicking a link, you agree to their use. Info.