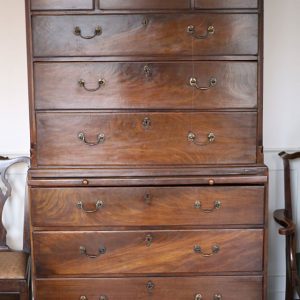 This mahogany 'highboy', or chest-on-chest, was used for storing linens, including shirts, stockings and under garments. It has a brushing slide, a shallow board which pulls out from the centre of the piece. This was used for brushing out linens or clothes before they were used or worn.

By tradition, this piece of furniture was John Wesley's. It has been in the Collection since Wesley's House was opened as a museum in 1898 and is marked 'John Wesley's Highboy' on an early, attached label.
View all services & events
We use cookies. By closing this banner, scrolling the page, or clicking a link, you agree to their use. Info.