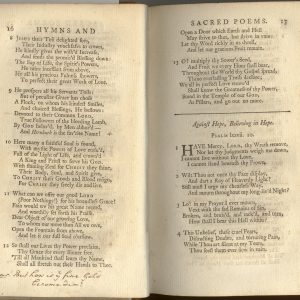 In March 1739 the Wesley brothers issued the first in a new series of collected verse. This was titled 'Hymns and Sacred Poems'. It was published under the names of both Wesleys, but the evidence suggests that John was the primary collector of the content and the editor of the work. The work included many contributions from early religious revivalists, such as George Herbert, John Gambold, and also a German Moravian hymnal.

'Hymns and Sacred Poems' went through five editions by 1756 and was central to early Methodist devotion and worship. This copy, the fifth edition (1756), belonged to John Wesley. The line 'And Hernhuth is the fav'rite name! Wesley annotated: "It was! But how is yr fine Gold become dim?'. By this time, Wesley had left behind his early fascination with the Moravian movement.
View all services & events
We use cookies. By closing this banner, scrolling the page, or clicking a link, you agree to their use. Info.