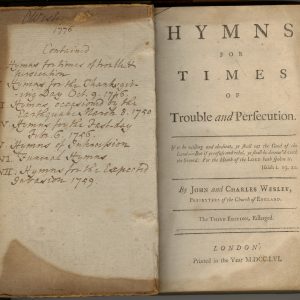 The first edition of 'Hymns for Times of Trouble and Persecution' was released in 1744, in the context of a feared Stuart invasion of Britain from France. Shortly after, with the threat of invasion continuing, the Wesleys issued a second edition, with fifteen new hymns in a section titled “Hymns for Times of Trouble for the Year 1745.” The third edition was printed in 1756, shortly after a major earthquake in Lisbon, which claimed many lives.

There is good reason to believe that Charles was author of all the hymns in this volume. John's name may have been added to indicate an editorial role and his shared political views.

This 1756 edition is bound with other pamphlets, a dated list (1776) of these is to the left in Charles Wesley's hand.
View all services & events
We use cookies. By closing this banner, scrolling the page, or clicking a link, you agree to their use. Info.