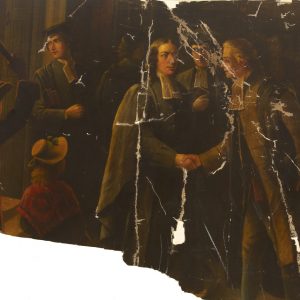 This fragment of a painting depicts the first meeting between John Wesley and George Whitefield, with Whitefield still in civilian clothing. Wesley and Whitefield first encountered one another in Oxford in 1732 when Whitefield, still a student, joined the 'Holy Club'. This was a prayer and assistance group which visited the poor and destitute, the imprisoned and others shunned by society. Both men were inspired by their Holy Club experience, which helped set them on their future course as leaders of the eighteenth-century revival and 'Methodism'.

However, the relationship between Whitefield and Wesley was complicated and their differences soon caused the infant Methodist movement to split. The Wesley brothers were “Arminians” who denied predestination, but Whitefield came to believe in a more Puritan, Calvinist doctrine which argued against Grace for all. Later years brought a degree of personal reconciliation but 18th century Methodism never (re)united as one movement.
View all services & events
We use cookies. By closing this banner, scrolling the page, or clicking a link, you agree to their use. Info.