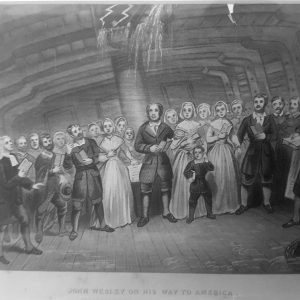 A Victorian illustration of John Wesley in 1735, on shipboard to Georgia in America. The ship was thrown about in storms and Wesley admired the collective calm of a Moravian group of fellow travellers, who were praying and singing without fear. For some years after, Wesley was influenced by Moravian thought and doctrine.
View all services & events
We use cookies. By closing this banner, scrolling the page, or clicking a link, you agree to their use. Info.