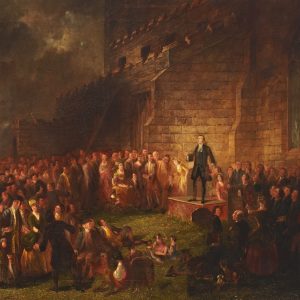 On Sunday June 6th 1742 John Wesley re-visited his home town, Epworth in Lincolnshire. His father Samuel Wesley had been the rector of St. Andrew’s Church there. Prior to the Sunday service Wesley had offered to assist the Curate with the service, who was dismissive. Instead, the Curate in his sermon that day discussed the dangers of religious enthusiasm, with scantily veiled references to John.

John knew many of the parishioner in the full church that day had come with an expectation to hear him preach. Forbidden to do so inside, he decided to do so in the graveyard instead and, so as not to be ejected, he preached from his father's grave, which was the property of the Wesley family.

Wesley later wrote he "... found such a congregation as I believe Epworth never saw before...I stood near the east end of the church, upon my father’s tomb stone and cried, ‘The kingdom of heaven is not meat and drink, but righteousness, and peace, and joy in the Holy Ghost.’

This portrait is a 19th century rendering of the scene, by the Pre-Raphaelite influenced painter A.W. Hunt.
View all services & events
We use cookies. By closing this banner, scrolling the page, or clicking a link, you agree to their use. Info.