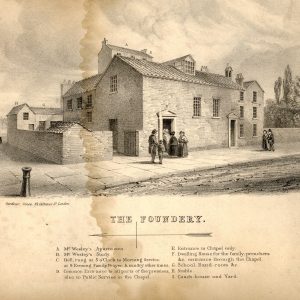 The' Foundery', in Moorfields, was Wesley's first London base for worship and an early meeting place for Methodists.

Built as a cannon foundry for the British Board of Ordnance, the cannons for Marlborough's campaigns against France in the reign of Queen Anne (the 'War of the Spanish succession') were cast here. It was closed in 1716 after a serious accident and Wesley acquired the lease and repaired the building in 1739. Wesley created a Chapel space capable of accommodating 1,500, which cost him around £900, a very large sum at the time. Wesley raised this from personal funds, subscriptions and donations.

The Foundery became quickly a community centre, with a meeting room, a free medical dispensary with its own apothecary and surgeon, and a free school. Later, a lending society was added and an almshouse provided on an adjacent site. The building remained in use until Wesley built his 'New' or City Road Chapel, today's Wesley's Chapel.
View all services & events
We use cookies. By closing this banner, scrolling the page, or clicking a link, you agree to their use. Info.