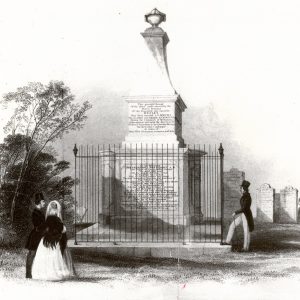 An early view of John Wesley's grave and monument in the grounds of Wesley's Chapel, City Road, where he was laid to rest on 9th March 1791.

Wesley was the 843rd person to be buried in the Chapel grounds and his epitaph was written by his fellow preacher and friend, Adam Clarke. Wesley's sister Martha, his biographer and six other preachers also share his crypt.
View all services & events
We use cookies. By closing this banner, scrolling the page, or clicking a link, you agree to their use. Info.