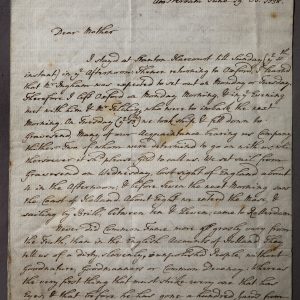 This first page of a letter John Wesley wrote to his mother Susanna from Amsterdam on June 19th, 1738.

The letter was written only shortly after Wesley's conversion experience in May 1738 and on his way to Herrnhut in Germany, where he went to study with some Moravian brethren. Wesley had become greatly impressed with the Moravians' deep piety while travelling with them on his voyage across the Atlantic a few years earlier.

In the letter, Wesley records his impression of Holland. He counters the 18th century English prejudice, that Dutch people were 'slovenly, unpolished people'. Instead, his first-hand experience showed him that the Dutch were 'neat' and everything was remarkably clean - possibly more so than he was used to at home!

The letter is dated 'OS', or 'old style'. England adopted the Gregorian calendar formally in 1752, much later than Catholic countries, by which time it was necessary to push the Julian or 'old style' calendar forward by 11 days. In practice, different parts of the UK began using the new style informally at different times. This may explain Wesley's insertion of 'OS' in 1738.
View all services & events
We use cookies. By closing this banner, scrolling the page, or clicking a link, you agree to their use. Info.