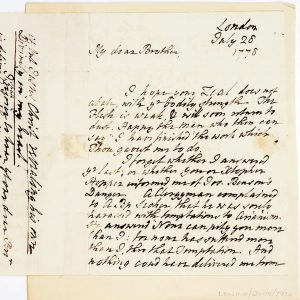 A significant letter written by Charles to his brother John Wesley in July 1778.

On page 2, Charles asks his brother: "What think you of our National Estate? My Bro. & I agree to differ (underlined). He is, as usual, all hope, & I am all fear. But a very short time will show who is the true prophet".

It is not quite clear what Charles means. The letter was written only two weeks after France declared war on Britain in July 1778 (they were opponents in the American War of Independence, 1775-83). Charles may thus be referring to the possible repercussions of these conflicts.

Charles Wesley's tone, and the strong emphasis on their opposing views, hints at disagreements or even a rift between the brothers.

For the full letter, please refer to 'Exhibits' and click on 'Selected Documents' (letter listed as July 26, 1776).
View all services & events
We use cookies. By closing this banner, scrolling the page, or clicking a link, you agree to their use. Info.