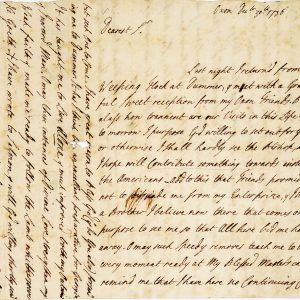 The letter was written following Charles's return to England in 1736, while his brother John was still serving in Savannah, Georgia. The letter makes clear Whitefield feels called to join John Wesley in Georgia, but also criticises Charles for serving as the governor's secretary when 'Labourers are so much wanted in the quality of a Missionary'.

Whitefield was to arrive in Georgia in May 1738, by which time John Wesley had already left. Whitefield became the leader of the American evangelical awakening.

For the full letter, please refer to 'Exhibits' and click on 'Selected Documents'.
View all services & events
We use cookies. By closing this banner, scrolling the page, or clicking a link, you agree to their use. Info.