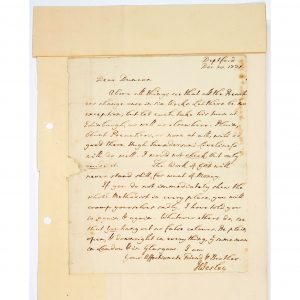 A letter full of advice written by John Wesley to Duncan Wright (1736-1791). Wright was an itinerant preacher who was noted for travelling with Wesley all over the United Kingdom in the 1760s and later for preaching in Gaelic in the Sottish Highlands.

In this 1771 letter, Wesley advises to rotate the preachers regularly in Scotland, especially in Edinburgh. Knowing the locals from experience, he notes that only 'plain, blunt speakers, or none at all, will do good there'. On a very personal note, he tells Wright to act as a 'whole' (or through and through) Methodist wherever he goes, and believe in himself.

Wright died the same year as John Wesley (1791). He was buried alongside Wesley in his tomb behind the Chapel in City Road London, today's Wesley's Chapel.
View all services & events
We use cookies. By closing this banner, scrolling the page, or clicking a link, you agree to their use. Info.