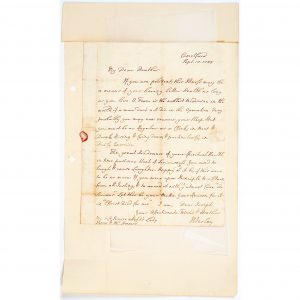 A serious letter written by John Wesley in 1755 and addressed to Joseph Cownley (1723-1792). Cownley was a talented Wesleyan Methodist preacher and in regular correspondence with John Wesley. Around this time, Cownley attracted unwanted attention and controversy by administering the sacrament to his listeners which, as a lay person, he was not entitled to.

Wesley talks of Cownley's health and sleep which, for some time, had not been good. Wesley's advice for better sleep is to be 'as regular as a Clock'. Wesley goes on to comment on Cownley's lack of spiritual well-being, apparently rooted in 'lack of seriousness'. It is possible that this is a veiled reference to and rebuke for Cownley's recent indiscretion.
View all services & events
We use cookies. By closing this banner, scrolling the page, or clicking a link, you agree to their use. Info.