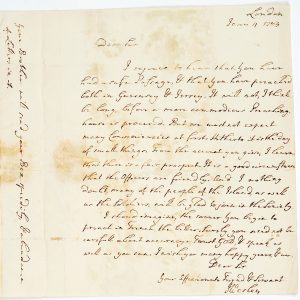 A short letter written by John Wesley to his friend and protegee, Robert Carr Brackenbury (1752-1818) in Jersey.

Brackenbury was much younger than Wesley and came from a well-to-do and influential family. Unusually for a man of his background, he decided to join the Methodist cause and built his first Chapel above the stables of his newly-constructed mansion in Lincolnshire in 1779. A a preacher and Chapel builder, he was never ordained but was befriended, trusted and held in high regard by Wesley.

This 1782 letter makes clear Brackenbury had just arrived in St Hellier on Jersey to serve as a preacher. Apparently the new preaching house was small, but Wesley was encouraging, writing: 'Hitherto is the day of small things'.
View all services & events
We use cookies. By closing this banner, scrolling the page, or clicking a link, you agree to their use. Info.