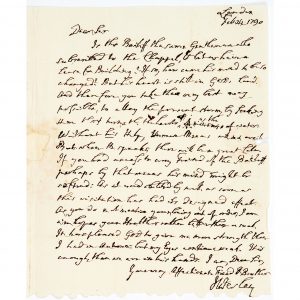 A letter written by John Wesley to preacher and friend Robert Carr Brackenbury (1752-1818) in 1790. The letter illustrates how Wesley's hand writing deteriorated as he got older. Wesley found it increasingly hard to see, and sometimes he now dictated letters instead.

The spidery hand writing is hard to make out. Wesley is referring repeatedly to a bailiff who has changed his mind about an issue relating to a 'present storm'.

See also John Wesley's letter of 1783 to Brackenbury in the Online Collection.
View all services & events
We use cookies. By closing this banner, scrolling the page, or clicking a link, you agree to their use. Info.