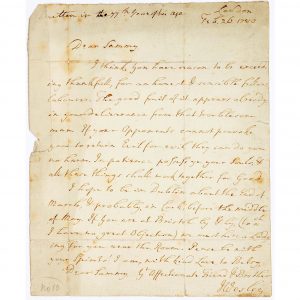 In this short and personal letter, John Wesley addresses 'Sammy', or Samuel Bradburn (1751-1816). Bradburn was a Methodist itinerant preacher and friend of Wesley who became one of the greatest and physically most commanding orators of his day.

Wesley congratulates Bradburn on acting wisely in a matter of personal conflict and tells him of his travel plans to Ireland that year (Wesley was 77 years old).
View all services & events
We use cookies. By closing this banner, scrolling the page, or clicking a link, you agree to their use. Info.