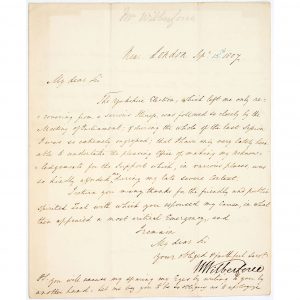 Brackenbury was a wealthy Lincolnshire landowner who had been influenced by John Wesley from an early age, built chapels and was very active promoting the Methodist cause. Wilberforce, a fellow Methodist, was the leader of the movement to abolish the slave trade. This took twenty years to secure.

The letter is an acknowledgement of and thanks for Carr Brackenbury's public support of Wilberforce during the 1807 parliamentary session. This session was crucial in securing the Slave Trade Act that year.

Interestingly, the letter was written as late as September 1807 - royal assent to the Act had been granted in March - which would indicate that Wilberforce was extremely busy that year. This may also explain why Wilberforce added the note that he could not acknowledge and thank "every friend within your circle" who had supported him.
View all services & events
We use cookies. By closing this banner, scrolling the page, or clicking a link, you agree to their use. Info.