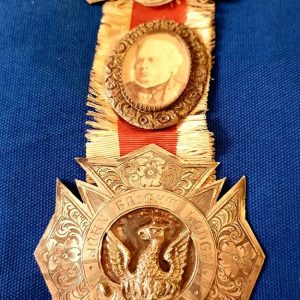 This elaborate silver lodge medal was awarded by the Temperance Movement United Order of Total Abstinence, Sons of the Phoenix. This originated in Clapham, London.

Temperance, i.e. the limitation of or total abstinence from alcohol, was a popular movement in the 1800s amongst Methodist but also most other religious denominations. Alcohol was regarded to be the root cause of many evils and social problems.

Many chose to give up alcohol altogether, especially among the middle classes. Some joined organisations such as the Sons of the Phoenix, which was professionally organised, although not specifically Methodist.
View all services & events
We use cookies. By closing this banner, scrolling the page, or clicking a link, you agree to their use. Info.