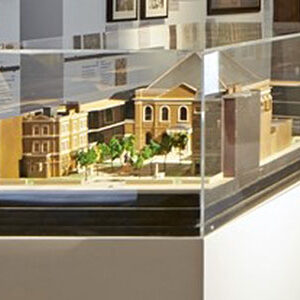 A model of Wesley's Chapel and the surrounding site. To the left of the entrance and in front of the Chapel are the ministers' manse and the Benson office building, to the right John Wesley's House and behind (not fully visible) the former Curate's House, now offices. The Chapel is in the background.

The model was commissioned as a working model, prior to building the large mirrored office building at the back of the Chapel in the early 1980s. The model shows the Victorian Benson building office block in the forecourt replaced with a square mirrored structure. This was not built, to preserve the architectural character of the courtyard.
View all services & events
We use cookies. By closing this banner, scrolling the page, or clicking a link, you agree to their use. Info.