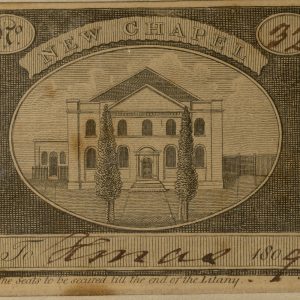 Pew rents were commonly charged to families or individuals in churches of most faiths until the mid 20th century. It was one of the principal ways of raising church income. The pew rent system often resulted in a kind of social status and hierarchy in church. The pews closest to the altar were usually occupied by the wealthiest of a parish.

This early receipt features an engraving of the Chapel soon after it was built, with its original round arch portico.
View all services & events
We use cookies. By closing this banner, scrolling the page, or clicking a link, you agree to their use. Info.