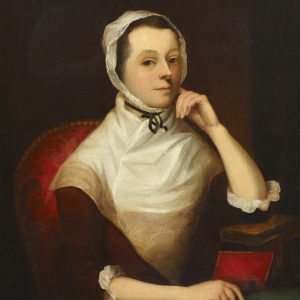 Ann Griffiths (nee Thomas) was born in Montgomeryshire into a devout Welsh family. A sermon by Benjamin Jones of Pwllheli led to her conversion. In 1797 she joined the Methodist society at Pont Robert and started writing hymns with figurative language and rich scriptural allusions.

Ann Griffiths died in 1805 in childbirth, a year after her marriage to Thomas Griffiths (also a Methodist). She was remembered as 'a woman of extraordinary piety and prayer' and is still one of the best-known hymn writers in the Welsh language.

The painting was once thought to have been after a work by Gainsborough but the dates do not match; Gainsborough died in 1788, when Ann Griffiths would have been only twelve years old.
View all services & events
We use cookies. By closing this banner, scrolling the page, or clicking a link, you agree to their use. Info.