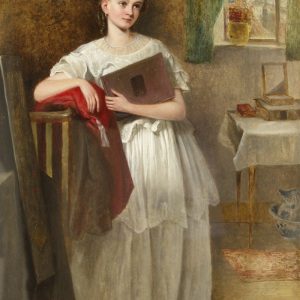 Born in Austria, Anna Kull (1841-1923) was probably the best known mid 19th century female Cellist and a child prodigy. She spent much of her youth travelling through Europe on concert tours. Aged 12 she first performed in London (1853), and then visited again in 1857, when this portrait was painted. Her final performance in the English capital took place in 1859. Kull withdrew from public performances in 1860 aged only 19, although she lived to the age of 82.

James Smetham (1821 – 1889) was an English Pre-Raphaelite Brotherhood painter and engraver. He was a follower of Dante Gabriel Rossetti.
View all services & events
We use cookies. By closing this banner, scrolling the page, or clicking a link, you agree to their use. Info.