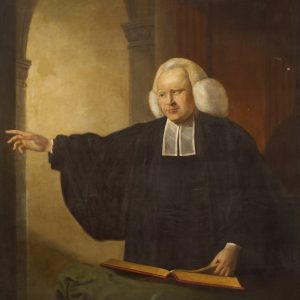 Born in 1714, the seventh child of Thomas and Elizabeth Whitefield, George Whitefield was left with a squint by a bout of childhood measles. This resulted in a nickname, 'Dr Squintum', among those who didn't like Whitefield in later life. Whitefield's squint is very pronounced in this painting.

At Oxford Whitefield met the Wesleys and became a member of the 'Holy Club', the fledgling evangelical group which preceded Methodism. Whitefield was an instant success as an evangelist and orator, and it was he who persuaded John Wesley to preach out of doors. Over the following thirty years, Whitefield's 'field preaching' attracted huge crowds in England, Scotland and the Americas, where he sailed seven times.

As time went by, Whitefield increasingly followed Calvinist doctrine, which brought him into collision course with the Wesleys, who argued against Calvinist views that grace and salvation were only for the few. Eventually, in the 1770s, Methodism divided into Wesleyan (Arminian) and Calvinistic branches.

See also 2001/8263 in the Collection for further information on the relationship between the Wesleys and Whitefield.
View all services & events
We use cookies. By closing this banner, scrolling the page, or clicking a link, you agree to their use. Info.