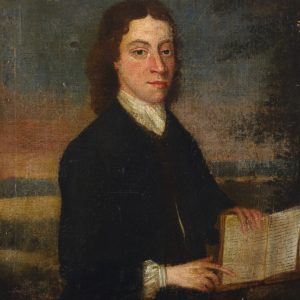 Cennick was an Evangelist and hymnwriter. Born in 1718, he was raised in a strict Anglican home but was only converted to religion in 1737, after a youthful bout of rebellion. Concerned with his spiritual life and having heard of Wesley's 'Holy Club' at Oxford, he travelled to Oxford and met both John Wesley and George Whitefield. For a while, he assisted with the Kingswood School Whitefield and Wesley had set up in Bristol, but soon found himself drawn to open air preaching with Wesley's encouragement.

Unfortunately, he and Wesley fell out over the role of Christian Perfection and Wesley's doctrine of Arminianism within the new movement. Cennick was suspended from the Kingswood Society in 1741. This brought Cennick closer to Whitefield, and soon after he became his assistant and had pastoral charge of the 'Tabernacle', Whitefield's new church in London, whenever Whitefield was away. Cennick also conducted a campaign of evangelisation in north Wiltshire, and built up a network of societies there.

By the mid 1740s, increasingly displeased with the Calvinist strand within Whitefield's Methodist movement, Cennick decided join the Moravian Church instead. He spent some time travelling in Europe and visited the Moravian headquarters at Herrnhut, after which he went to Ireland. There, he started dozens of societies and was ordained a Moravian deacon in 1749.

A number of similar portraits of Cennick exist; none is of high quality. It is likely they were all copied from a better portrait, possibly now lost.
View all services & events
We use cookies. By closing this banner, scrolling the page, or clicking a link, you agree to their use. Info.