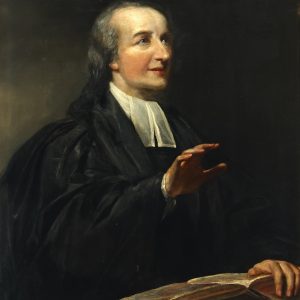 Born Jean Guillaume de la Fléchère into an aristocratic French family in 1729, Fletcher's early life was spent soldiering and tutoring in England. There, he experienced a religious conversion in 1755, was ordained in 1757 and made the acquaintance of the Wesley brothers and Selina, Countess of Huntingdon. Fletcher became the Countess's chaplain but was also involved closely with the parish of Madeley and Colebrookdale. Fletcher proved a good preacher and got involved in Methodism more widely.

Close to Wesley and the Countess, Fletcher ultimately found himself at the centre of the controversy between Calvinist and Arminian Methodism, in which he chose (and fiercely defended) Wesley's Arminian side. His final contributions to the controversy, 'The Doctrines of Grace and Justice' and 'The Reconciliation', suggest that Calvinism and Arminianism should co-exist.

Many contemporaries regarded Fletcher as an example of John Wesley's teachings of Christian Perfection and possible successor to Wesley.
View all services & events
We use cookies. By closing this banner, scrolling the page, or clicking a link, you agree to their use. Info.