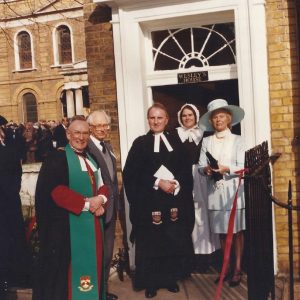 An image of the re-opening of John Wesley's House in 1995 following refurbishment.

In the early 1990s, it was decided to present John Wesley's House closer to how it might have appeared when John Wesley lived in it. Following extensive studies and with professional advice, the house was fully refurbished.

The image shows the re-opening day in 1995, with the President of Conference, the Princess Alexandra, The Honourable Lady Ogilvy, and the then minister of the Chapel in the centre of the picture.
View all services & events
We use cookies. By closing this banner, scrolling the page, or clicking a link, you agree to their use. Info.