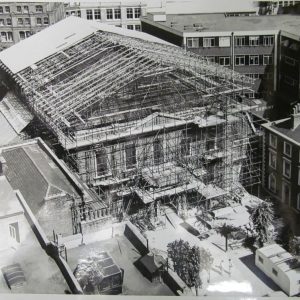 By the 1970s, the Chapel was in a very bad state of repair. The foundations were giving way, there was wood rot in many places and the Chapel needed extensive roof repairs. The situation was critical and there were some who wanted to demolish the historic structure and replace it with a new building. Luckily, with help from Methodists around the world, the Chapel was saved. The photograph shows the roof works under way, some months before the re-opening of the Chapel in November 1978.
View all services & events
We use cookies. By closing this banner, scrolling the page, or clicking a link, you agree to their use. Info.