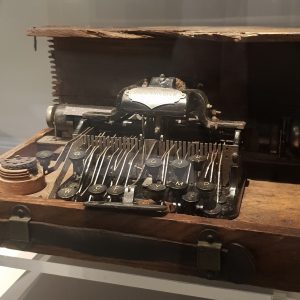 This typewriter belonged to the Rev Roderick John Johnston MacDonald (1859-1906) from Edinburgh, medical missionary in China.

The Wesleyan Missionary Society had sent out missionaries to China from 1852 and established itself in Hankow and the province of Hupeh. Missionary work was often hard but could also be very dangerous. Roderick MacDonald was travelling on China's West River on SS Sainam when the boat was seized by pirates on 13th July 1906. MacDonald was shot while attending the wounded captain of the ship. His mangled typewriter and umbrella were the only items recovered.
View all services & events
We use cookies. By closing this banner, scrolling the page, or clicking a link, you agree to their use. Info.