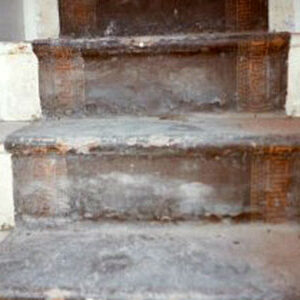 The photo shows the stairs inside John Wesley's House prior to refurbishment in the 1990s. The stairs are made of pine, in John Wesley's day referred to as 'deal', and a number of decorative schemes can be made out.

The light brown stripped pine finish of the stairs dates to the 1930s. At that time all paintwork in the house was removed, in the (mistaken) belief that woodwork was left unpainted in the 1700s. The narrow central 'band' in dark brown is painted however and would seem to be earlier. It is probably a painted stair 'runner', dating to the mid 1800s.

According to the 1779 building plans of John Wesley's House, the staircase was painted five times in French grey. Likely, there wouldn't have been a carpet but a 'drugget', a cloth painted to look like a stair runner.
View all services & events
We use cookies. By closing this banner, scrolling the page, or clicking a link, you agree to their use. Info.