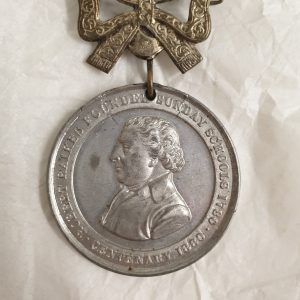 This medal commemorates the 100th anniversary of the founding of Sunday Schools by Robert Raikes in 1780.

Raikes (1736 - 1811) was a pioneer of the Sunday School movement, which started with a school for boys in the slums. Raikes saw schooling as the best early intervention in a possible life of crime, a preventive measure which was better than a cure. Sunday schooling was chosen as this was usually the only day boys were not working (usually in factories), and teaching materials were based on the Bible. Although not a Methodist, Raikes' efforts and achievements were discussed in Wesley's Methodist or 'Arminian' Magazine. Methodism organised its own Sunday Schools, open to boys and girls, from the early 19th century.

The medals would have been distributed among children attending Sunday School in 1880. See also the other Sunday School commemorative medals in the Online Collection.
View all services & events
We use cookies. By closing this banner, scrolling the page, or clicking a link, you agree to their use. Info.