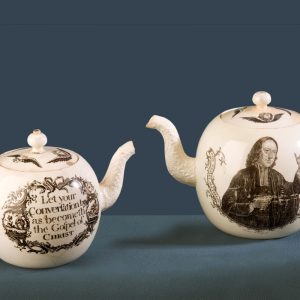 Commemorative ware featuring John Wesley was popular during Wesley’s later years and increasingly so in memory of Wesley after his death in 1791. Like these teapots which are made of creamware (a type of ceramic associated with Josiah Wedgwood), they usually featured an image of Wesley and a prayer or moral text.
View all services & events
We use cookies. By closing this banner, scrolling the page, or clicking a link, you agree to their use. Info.