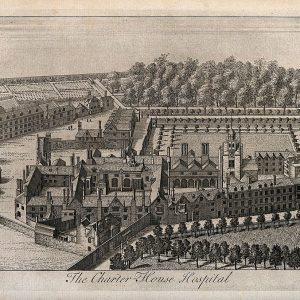 The London Charterhouse was founded as a Carthusian priory in 1371, reportedly on land used as one of the largest London plague pits during the 'Black Death' plague of 1348-49. In 1611, the buildings were bought by Thomas Sutton, who established a school for boys and almshouses for the elderly.

John Wesley was admitted as a Foundation Scholar at the school in 1714, aged 11. John had been nominated by the Duke of Buckingham and Marquis of Normanby, his father's patron. Foundation Scholars were given financial support by the Charterhouse (or the 'Charter House Hospital', as it was known then), as their fathers could not afford to pay the school fees. John stayed until 1720 and then went on to study at Christ Church, Oxford.

This engraving shows the Charterhouse much as John would have known it.
View all services & events
We use cookies. By closing this banner, scrolling the page, or clicking a link, you agree to their use. Info.