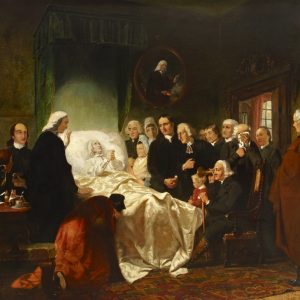 On 2nd March 1791, Methodist founder, Rev John Wesley died at his house in London following a final five day illness. He was 88 years old. It is reported that he sang a final hymn “I ‘II Praise My Maker While I’ve Breath”, his final words being: “Best of all is, God is with us.” Wesley’s ministry re-energized and transformed the expression of Christian faith in Britain and his pastoral and preaching activity generated great enthusiasm. This in turn helped shape and direct Methodism.

The portrait shows Wesley on his deathbed, surrounded by friends, family and preachers. The work was painted around fifty years after Wesley's death and the artist has employed considerable license, including the dimensions of the room in which Wesley passed away. There is also a tradition which suggests Wesley died in a chair in his Study.

Marshall Claxton (1811 - 1881) was the son of a Wesleyan Methodist minister from Lancashire and painted landscape, portrait and genre paintings. He was known for his depictions of Wesleyan and Methodist subjects and exhibited around 30 paintings at the Royal Academy, including this work.
View all services & events
We use cookies. By closing this banner, scrolling the page, or clicking a link, you agree to their use. Info.