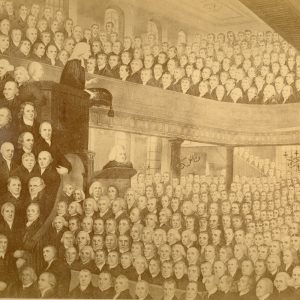 A posthumous engraving of John Wesley amongst his preachers in the City Road (today's Wesley's) Chapel. The depiction is fanciful, as both preachers of Wesley's day, such as Thomas Coke, and others who were alive in 1822 are illustrated. The work is one of the earliest detailed engravings of the interior of the Chapel and gives an idea of its appearance before Victorian alterations were carried out.
View all services & events
We use cookies. By closing this banner, scrolling the page, or clicking a link, you agree to their use. Info.