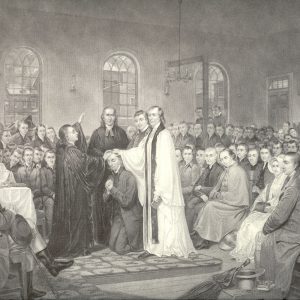 This facsimile print of an engraving dating to the late 1800s shows Francis Asbury (1745-1816). Asbury was born in Staffordshire, brought up a Methodist and ordained a travelling preacher by Wesley. He went to the Americas in 1771 to minister to the growing number of Methodists there.

In 1784 in a controversial move, John Wesley ordained Englishman Thomas Coke as Wesley's American superintendent. Coke, in turn, ordained Asbury at the Baltimore "Christmas Conference" of 1784 as Co-Superintendent, or Bishop. This gave birth to the American Methodist Episcopal Church and ultimately split American Methodism from the Anglican Church and the Methodist Church in England.

See also Charles Wesley's ditty on the occasion of Coke's controversial ordination of Asbury in the Collection.
View all services & events
We use cookies. By closing this banner, scrolling the page, or clicking a link, you agree to their use. Info.